What is a systematic review? 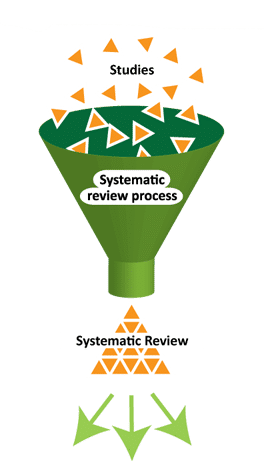 For this reason, many evidence-based disciplines use so-called ‘systematic reviews’ instead. This type of review is a specific methodology that aims to comprehensively identify all relevant studies on a specific topic, and to select appropriate studies based on explicit criteria. In addition, the methodological quality of the studies included is assessed by on the basis of explicit criteria, such as the presence of a pre-test or a control group. In contrast to a conventional literature review, a systematic review (SR) is transparent, verifiable, and reproducible, and, as a result, the likelihood of bias is considerably smaller. Many SRs also include a meta-analysis, in which statistical analysis techniques are used to combine the results of individual studies to arrive at a more accurate estimate of effects .

In some cases, systematic reviews are not only used as a way to aggregate evidence relating to a specific topic, but also to make clear what is not known and, thereby, to direct new primary research into areas where there is a gap in the body of knowledge.

Although the SR methodology was originally developed in the field of medicine, its added value is evident in disciplines such as nursing, education, policing, criminology, public policy, and management. In disciplines in which evidence-based practice is well established, SRs are provided by global communities such as the Cochrane and Campbell collaborations. In management, however, the SR methodology is not yet widely adopted, and systematic reviews are consequently scarce.